I’m having the most splendid time in New Zealand. Mutual Aid Networks has been very very good to me 🙂

And I’m extremely happy to report that we’ll be having another pilot site come online soon, The MANA – Mutual Aid Network of Aotearoa. Aotearoa is the Maori name for this land.

For those who don’t already know, I came here to speak at the Living Economies Expo – one of my favorite ever speaking engagements. I had an hour and a half on Saturday morning, starting at 8:15 am – those who know me know I’m opposite of a morning person. But this is such a time warp anyway – 26 hours of travel time and an 18-hour time difference, and then it’s fall here and we just had NZ daylight savings time… So 8:15 was just peachy.

The audience is so cool because everyone is already engaging in something awesome – savings pools, timebanks, really creative public spaces that have arisen in the rubble from the 2011 earthquakes. It’s really inspirational. So they were easy to talk to and I really enjoyed it. I’ll share the video when I have it.

There were lots of other really incredible speakers, workshops, attendees. I learned about waqf

from the wonderful Thamina Ashraf, and it’s a model for funding communities that could work really well in lots of contexts. Learned much more about savings pools (we’re going to tweak them and call a larger set of options Common Funds) from Phil Stevens – whom we’ve been working with for years, and I never even knew what he looked like until I arrived! – and others who use them here. They work! They’re not that hard! There’s so much more, but I’ll share that later, and link to places you can learn more. 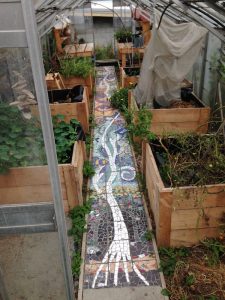 Margaret Jefferies, of Project Lyttelton and the Lyttelton Timebank, who are famous in the timebanking world for their amazing response to the 2011 earthquakes and the massive community groundwork they’ve laid here, had a wonderful presence throughout. And throughout the whole community. Everywhere you look you see evidence of her/their work. The

free table on the main street, where you leave food or extra stuff to be picked up by anyone. Community gardens, swap shop. And she took us on a tour of other similar efforts, including a former Baptist church, damaged in the earthquake, that will now become a community center with a wellness center, cafe, events, workspace, and more. The community is designing it and it’s going to be gorgeous. I took the ‘before’ pictures and look forward to the ‘after’ pix when I come back next year.

OK, more on all this later. But now I’m sharing my upcoming schedule in case you or someone you know will be nearby. And there are some times that can be filled, or have things in the works that I’ll share when they’re confirmed.

And  some pictures at the bottom here, and more to come.

Thanks for reading!
–Stephanie

Here’s the schedule for the rest of the tour:
Thursday Apr 6 – tent. meeting with Christchurch City Council (Margaret Jefferies)

Saturday April 8th
See some of Golden Bay in the morning
Transit to Motueka early afternoon
Talk in Motueka in the evening.

Help out the HUMANs

Donate via PayPal to HUMANs (aka WI MAN):